By Rebecca on March 6, 2010 in Collaborations, Public Programs 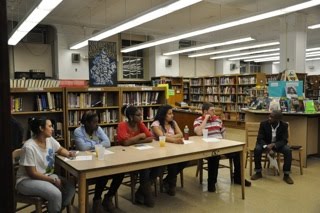 Five students from the Secondary School for Research, Nicol Medina, Kia Yard, Kittrell Breland, Ramshah Kanwal and Jake Lehman, were on a panel discussion about gentrification as part of the public programming for the exhibition The Gentrification of Brooklyn: The Pink Elephant Speaks, at the Museum for Contemporary African Diaspora Arts in Fort Greene, Brooklyn. The panel was organized by Ruby Amanze, the Director of Education for MoCADA, and visiting curator, Dexter Wimberly, who curated the exhibition, and facilitated the panel which was held in the school’s library on Wednesday, Feb. 24. The five students were part of the Brooklyn History class led by teacher Michael Salak in collaboration with Urban Memory Project at the school from September – January. The students discussed issues ranging from how gentrification impacts the architecture and feel of their communities, as well as the ways in which it both harms and helps their neighborhoods.